The interesting thing about learning how to turn on a snowboard is that unfortunately there are 3 levels of the turn you need to master before you can truly begin to ride the mountain with style and grace.

That age old question, if only it was as easy as in explaining it as in doing it!

Typically, you’ll struggle at the beginner stage of snowboarding, just even learning to make some turns can be challenging for some people..

Once you get past this stage and into the intermediate progression, things start changing pretty fast and before you know it you’ll be heading down the mountain like a runaway train and sometime it will feel like you have no brakes whatsoever!

During this progression, expect to come across many challenges and unless you fully understand the phases of the turn, don’t expect your basic Beginner  turns will be sufficient.

Once you finally get through the intermediate stages of snowboarding, next you need to learn about turning on steeps and black diamond trials.

It’s at this stage that all your extra work in mastering the turns in the intermediate progression, that you should have a relatively smooth transition to becoming an advanced snowboarder.

Expect to start learning about pivot turns, better anticipation with the upper body and generally speaking, a bigger range of movement throughout the entire body.

With that in mind, let’s start at the beginning so you have a strong foundation to build from.

The phases of the snowboard turn.

Here we break the turn down into three phases:

1) INITIATION PHASE OF THE Snowboard TURN (or beginning);

2) CONTROL Phase of the Snowboard Turn (or body)

3)  COMPLETION/PREPERATION (or end) Phase of the S Turn 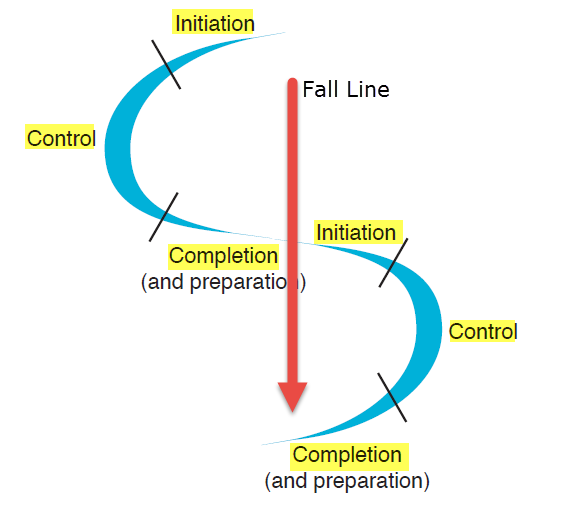 INITIATION PHASE OF THE SNOWBOARD TURN: 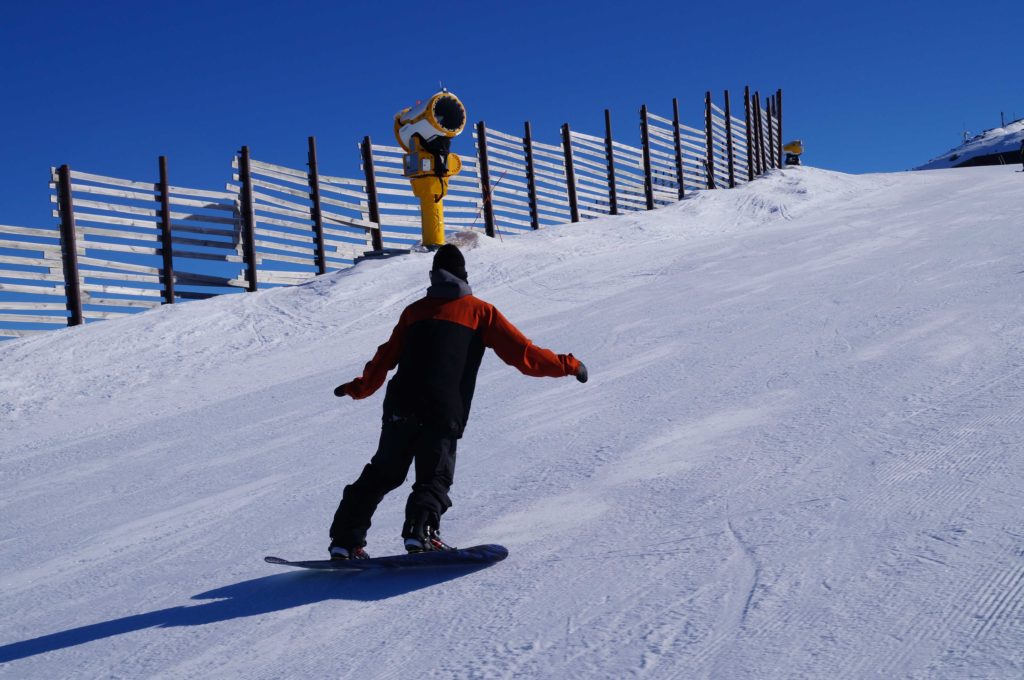 At the beginning of the turn, the uphill edge is released and the tip of the board moves into the arc of the new turn.

Movements here may include extending or flexing to aid un-weighting, stopping the rotation (from the old turn), releasing tension created in the torso and hips (anticipation/release), and gently steering the body into the new direction.

CONTROL PHASE OF THE TURN: 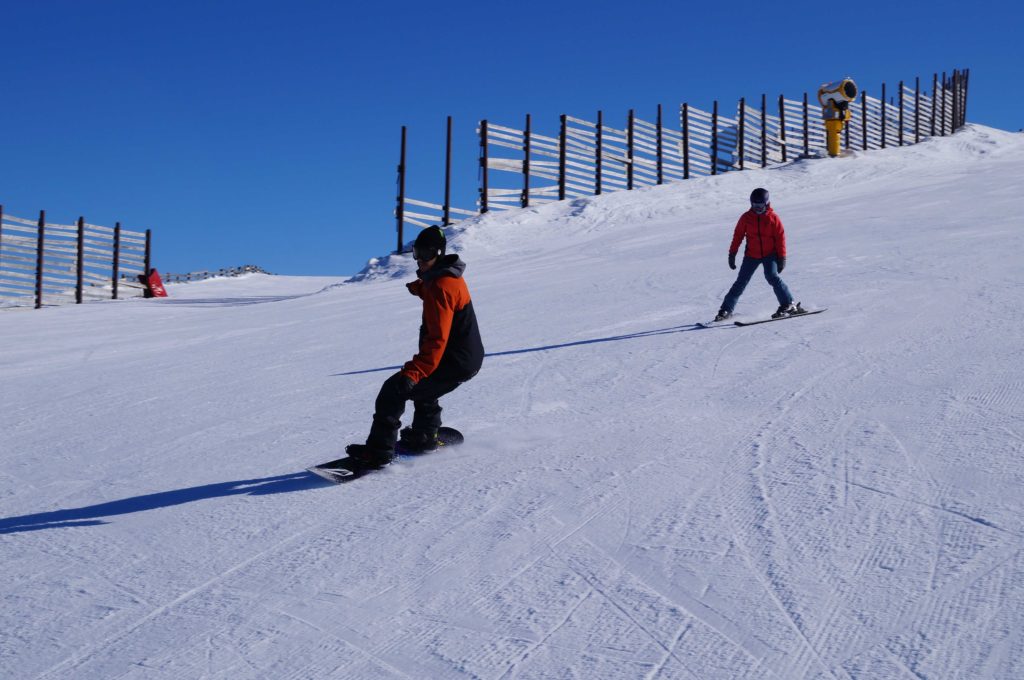 This refers to the ‘belly’ of the turn, where the board is guided down the hill, through the fall-line and towards the finish of the turn.

COMPLETITION/PREPERATION PHASE OF THE S TURN: 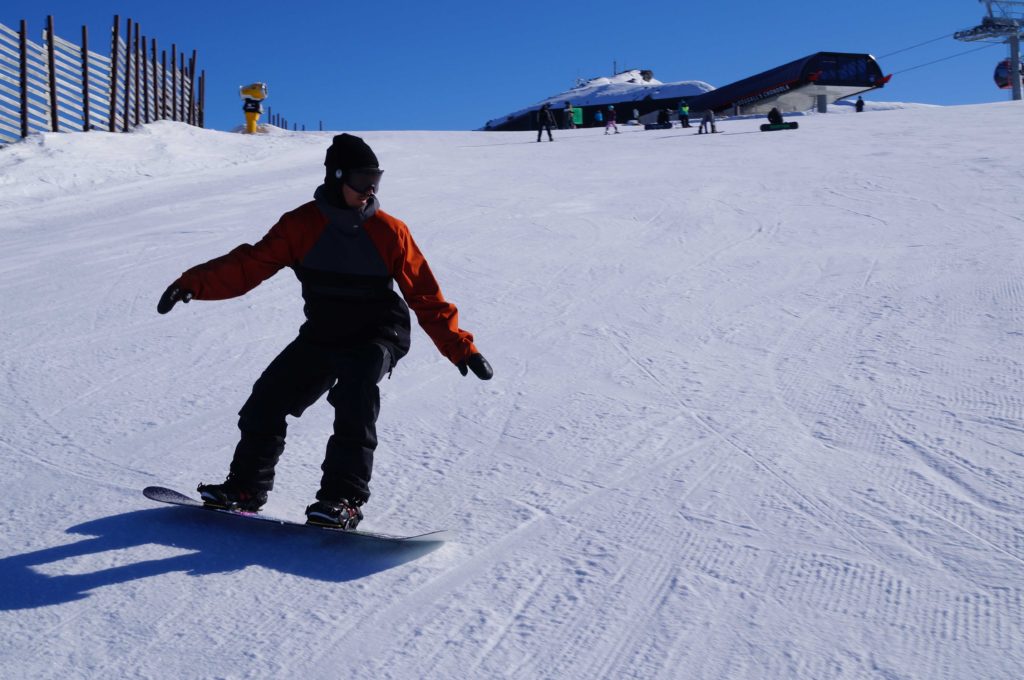 This phase is where you’re completing the present turn while preparing to initiate the next turn.

Completion movements here consist of rotating to help finish more closed turns, whilst increasing the edge angle as the board moves across the fall-line.

At some point these movements cease to resist the forces pulling the rider out of the turn and consist of slower rotation and a decrease in edge angle in order to prepare for the next turn.

Preparation movements include looking down the hill at the approaching terrain, rotating the upper body in the new direction, and possibly building tension in the torso and hips.

At higher levels it is especially important that as we move into heel-side turns we prepare the upper body rotationally, so we can maintain balance and see through to the end of that turn.

NOTE: for those that do not know, this is the very same concept for how to turn a snowboard doing the goofy riding style .

So that’s the phases of the snowboard s turn…it’s extremely important to understand all movements of the turn if you ever want to master the art of riding steeps.

Your snowboard stance when turning?

To make toe and heel edge snowboard s turns, you need to consciously think about the following body movements:

Where is your head looking?

What are your shoulders doing?

What are your arms doing?

Are your hips twisted or aligned with the snowboard?

And finally, are you stiff in the legs or are your knees and feet relaxed and slight flexed?

Each of the steps below, contain a specific technique of movements for that exact body part mentioned.

Make sure you understand each step and start thinking about how you are riding in a more conscious style of snowboarding.

Start visualizing your body making the movements before you are even on the snow, The body always follows the mind so it must see the visual image (in the third eye) before it can implement the movements.

And most important, relax and enjoy the turning process.

Your snowboard stance for turning on a snowboard 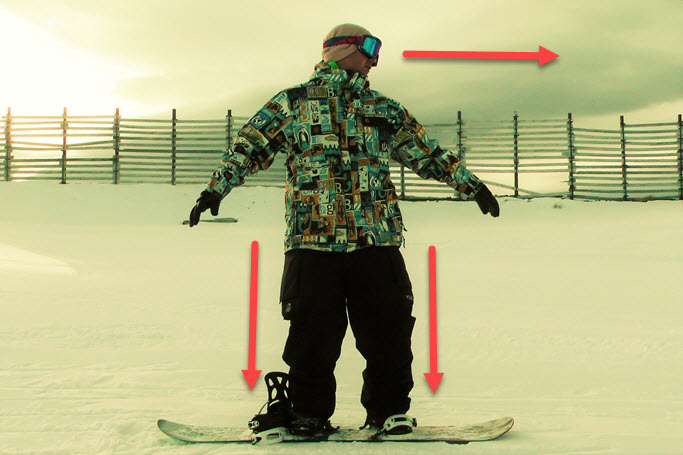 When turning on a snowboard, most people (90%) forget to use their head! This is one of the most important aspects of turning…You can get away with poor head steering on green slopes, but as soon as you hit blue and black trails, you lack or skill will quickly show!

Develop the correct habit of ALWAYS looking UP and In the direction of Travel!

Before you start you next turn, scope the anticipated line out before you begin your heel or toe edge s turn.

The shoulders and the snowboard work closely together, you can either use them in your favour as a tight niched unit or create a lot of tension and frustration during the turning phases.

In general, your shoulders should always be in alignment with your snowboard and help with some anticipation into the new turn, the key is to make sure you realign upper and lower body parts before entering the next turn

NOTE: MOST of the ability to turn our snowboard comes from the lower body, the upper body just complements the lower body movements.

Look and Turn your head and shoulders in the direction you want to Travel, then… 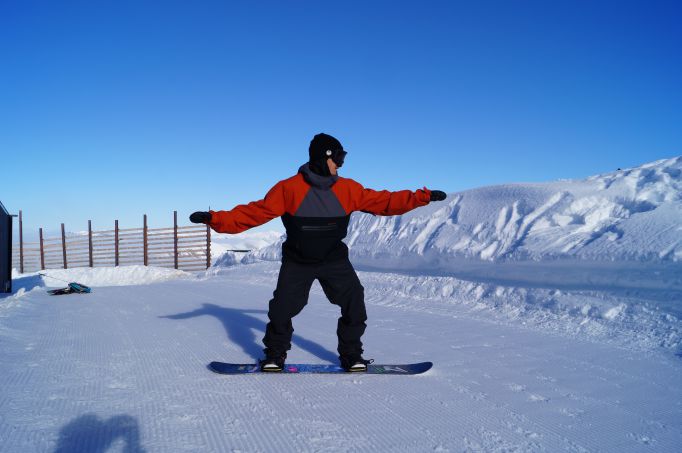 It is important to keep your hips in alignment with your snowboard, This will help stop counter rotation into new turns and aid in torsional twist for generating a quick edge change:

Try and stay soft in knees always, this will help with flexion and extension and aid in absorption of different snow conditions. ALWAYS keep your knees flexed, even at your highest point of extension (in the legs) you knees should still be slightly flexed….

The movement of the feet makes a huge impact on your riding, as the feet are directly mounted to the snowboard.

Standing in a stationary position, Practice paddling your feet while turning on your snowboard. Think about initiating the turn with pressure on the front foot. (and steering the knee through the turn)

Keep weight forward when learning how to turn, as you progress through the various levels, you can start manipulating the snowboard in different ways through different longitudinal movements.

Make sure to check out our snowboarding Execution plans if you want to really learn the secrets to advanced snowboarding! click here