How to Slow down on a Snowboard

A common question among beginner Snowboarders and Intermediate snowboarders (when they start riding black trails) is How to control speed when Carving?

Without mastering the basic skill set of slowing down, you will always suck at snowboarding and more than likely end up getting a massive injury or killing someone on the mountain.

So pay attention and take some notes…

Let’s Head to the breakdown and learn about the various ways we can slow down on a snowboard.

“The BREAKDOWN’ of Speed Control Techniques”

The beginners speed control techniques on the snowboard.

Applying Snowboard edge Pressure to slow down is one of the most common ways to slow down on a snowboard but most beginner snowboarders tend to struggle when keeping an edge in the snow to actually be able to apply edge pressure.

First of all, If you don’t already know, when you flex down into you snowboard through the lower body (Hip, knees & feet) you are creating edge pressure and friction in the snow. When you extend up you are essentially releasing that very same edge pressure you have just created,

So, with that in mind, ALWAYS remember to use flexion (flex down into the snowboard) as your fundamental Stopping technique. 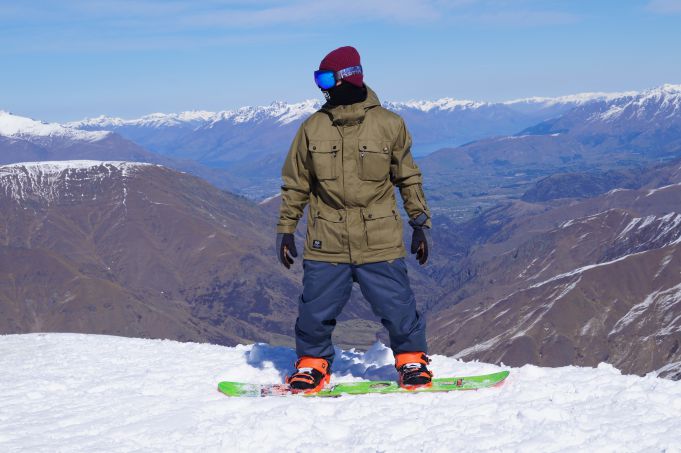 Now…one of the main reasons beginner snowboarders cannot create good edge pressure to slow down is because there basic snowboard stance is incorrect.

Ultimately when you stop you want to use good flexion (apply pressure) down into the snowboard, have a strong basic stance (see basic stance for slowing down) and even weight on both feet!

What generally happens when people end up going too fast and losing control is that they will shift their weight onto the back foot.

This is because they feel they have lost control (for a split second) and our natural tendencies when we are scared is to back away from the situation we are currently in….

Hence, people shifting their weight onto the back foot…

NOTE: This is the brain protecting the body from fear of crashing

So, the idea behind having even weight on both feet is to bring your snowboard across the fall line of the slope (pitch) you would be on.

Where people tend to go wrong is at edge change, when their snowboard is pointing down the fall line and generating a lot of speed…The key here is to maintain your basic stance and fully commit to the new turn.

‘’Yea but I always pick up too much speed”

2) Using Turn shape to slow down on the snowboard!

We use 2 types of turn shapes in snowboarding, either an open turn shape or a closed turn shape. 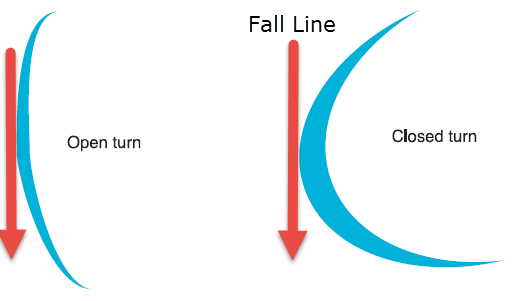 Always use a closed turn shape when learning how to slow down when snowboarding. This is the turn shape you must learn to use if you’re are at beginning stages…

This is what I was referring to before, taking too much speed into the turn. Always remember to steer your snowboard across the hill to wash away excess speed before committing into the new turn.

If you have to, steer the board back up the hill if necessary. (Just get rid of that speed)

As soon as you start steering your snowboard down the fall line (into the new turn), you’re going to pick up even more speed so make sure you are feeling somewhat controlled and going slow before beginning the turn.

3) How to slow down on the snowboard using Terrain

This kinda touches the point I just made before as well, when I told you to steer your snowboard back up the hill to help reduce speed.

The idea behind using terrain is more geared towards intermediate and advanced snowboarders. 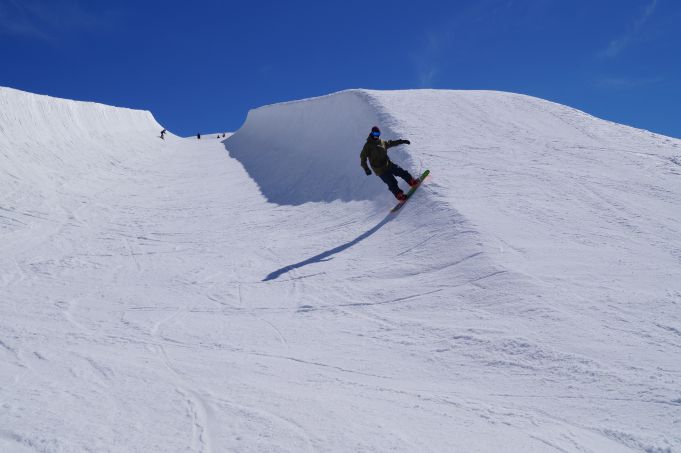 If you find yourself generating too much speed on those steep, Icy and bumpy trails, try and start thinking about using the banks or even built up snow banks (even moguls) to help wash away the speed before committing into the new turn.

This is especially helpful when riding double black diamond trails that have been tracked out from the previous powder day.

The point I’m trying to make is that on steep terrain, you goal is to get your snowboard through the turn phase and back across the fall line FAST. With steep terrain comes a lot more speed.

So be assertive in the edge change, soft in the legs, head looking into the direction of travel and use great flexion and extension….

REMEMBER: you have to release the pressure before you attempt the turn!

NOTE: Want to learn how to stay balanced and controlled when carving on a snowboard? Simply download this CARVING snowboarder roadmap to learn all aspects of learning how to carve. Learn what bad habits snowboarders make so you can AVOID them to progress faster and maintain balance and control easier…check it out now!

4) PIVOT TURN for slowing down when snowboarding!

Just to let you know, unless you’re an intermediate/ Advanced snowboarder who knows the correct techniques for actually slowing down on the snowboard…

‘Bringing the snowboard back across the fall line, strong basic stance and flexing down into the snowboard edge to slowly apply edge pressure’, then I guess it’s alright to use this technique.

Here’s how you do it:

This time before you turn, you’re going to keep your weight over the front foot and instead of making a smooth C Turn shape while flexing down with even weight to stop, you’re going to kick the back foot around so your snowboard comes back across the fall line super-fast and border lines a side slip pattern in the snow.

You must be using correct anticipation techniques to help with steering and remember to maintain a good basic stance at all times!

NOTE: This technique is better used for super steeps like Double and Triple black diamond terrain, your biggest problem will be trying to stop your legs from shaking (adrenalin) and trying to see what’s under your snowboard.

Make sure you head on over to our ’CARVING LIKE A PRO’ Snowboarding Execution plan and watch all the step by step video tutorials we have in that module…Everything we covered here is in it, and some!

Final note: Speed is your friend when snowboarding, so the sooner you learn how to feel comfortable with it and your ability to tame it (stop correctly), your snowboarding will quite literally start going through the roof..