Counter rotation on a Snowboard

So, exactly what is counter rotation?

Well, I can tell you this, 98% of snowboarders I see out on the hill have some form of bad counter rotation going on while they are riding….

They don’t even know it but this is what separates the boys from the men…Sure some snowboarders look good going through the park but when you put them on the steeps, there riding ability really starts to show through…..’not so good’

This essentially is what stops you from making smooth, friction free turns down the steepest runs you can find. 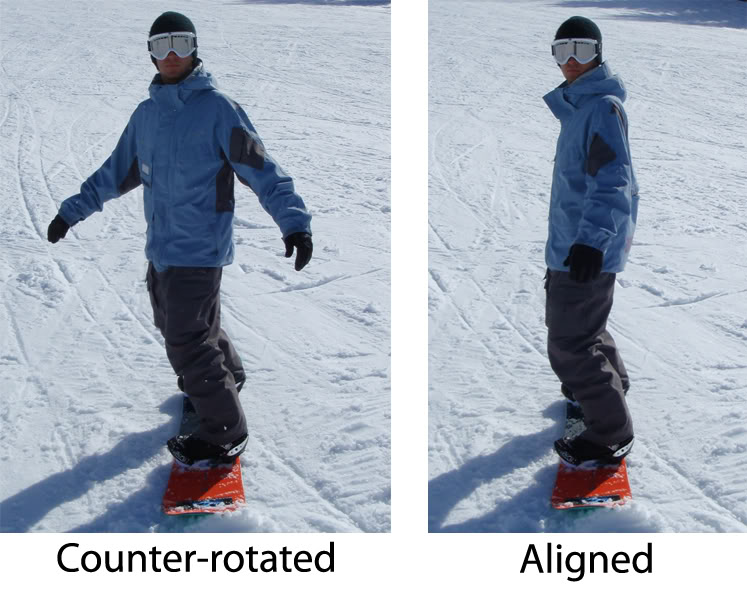 In other words, if you don’t learn how to anticipate the turn correctly, you will always have an edge that feels easy (toe to heel) and one turn that feels hard (heel to toe).

This is why you MUST learn this technique if you want to keep advancing your skill set in snowboarding on blue/black runs without breaking some bones or seriously injuring someone else!

Rotational movements are commonly referred to as steering movements, as they help control the direction in which our snowboard is travelling.

The most efficient place to perform this technique is when you have released the edge pressure from your snowboard and when edge angle is low as the snowboard will slide and skid easier.

So how do we stop counter rotation?

And what exactly is it?

Counter Rotation is when your upper body is separate from your lower body, when you are snowboarding, your entire body should be aligned (not twisted) on your snowboard.

Counter rotation is where you’re trying to steer your snowboard down the hill but at the same time your upper body is going in the complete opposite direction at the initiation of the turn.

To Get the full Video Series Step by Step Progression to Riding Steeps.... Click Here

That’s why, as soon as you add steep terrain into the equation, everything seems awkward and dangerous, except for that one safety turn that you have been doing for way too long!!!

This is also why, you are not progressing into the next level of the snowboard progression, by using counter rotation in your snowboarding, you are limiting your ability and you don’t even know it?

So here is the solution to counter rotation….

All you have to do is point to where you want to go, it’s honestly that easy!

We call it Anticipation into the turn, Keep your lower body aligned throughout the entire turn and always point to exactly where you want to travel!

This one tip will improve your snowboarding by tenfold, Keep practicing it until both turns feel natural and Easy!

To get the full progression of Timing and Anticipation Exercises to stop Counter Rotation and improve your ability to ride down steep runs making any type of turn you want, without falling or losing control, click here to register!

NOTE: Want to learn how to stay balanced and controlled when Riding steeps on a snowboard? Simply download this bad habits cheat sheet to gain an unfair advantage on the hill. Learn what bad habits snowboarders make so you can AVOID them to progress faster and maintain balance and control easier…check it out now!

Not a member of the OSC Engage Facebook Group. Learn more here....

1 Response to "Counter Rotation on a Snowboard – Make it Easy on Yourself!"